I have always dreamed of a little cabin in the woods. My friend Robert says, “Mike, you are so optimistic. You are the only person I know who calls a storage shed a cabin.” Nevertheless, I managed to get a little building and put it on a small piece of land we have in the woods in middle Tennessee. For about a year it has been sitting in a field, waiting to be moved to the right spot and put on a good foundation. So last week Doris and I took a week off and went and stayed in my sister’s nearby, nice cabin (do I sound bitter?) with the goal of building the foundation and getting the cabin moved.

While Doris enjoyed a good book, I went down the hill every day to our little spot and worked on the piers upon which my dream cabin would sit. I dug out the holes for the footers, smoothed the ground with sand and pebbles, and laid the blocks carefully to make sure they were straight and level. Eight piers, four in the middle and one on each corner, stood strong and solid waiting for the cabin. I had contracted with a wrecker company in town to move the building though I was a little nervous about the size of the cabin in comparison to the size of the truck. I took them pictures, gave them measurements, kept quizzing them, “Are you sure you can do this?” Every time the confident response was, “Of course we can. We do it all the time.”

The afternoon of the move was exciting. Doris drove down the hill to watch. I had the foundation ready. A young guy (not the confident man I had been talking to) drove up in the wrecker truck with his girlfriend beside him. He got out of the truck, spit on the dirt road, and said “Man, we’ve never done anything like this before.” Not what I wanted to hear. He hooked the cabin to a cable, tilted back the bed, and to my amazement, hauled the whole thing right up onto the back of the truck without a hitch. This is gonna’ be great. Then he started moving. With every little dip in the rough ground the heavy cabin would shift a little and the not as heavy truck would lift up, wheels almost leaving the ground. He hadn’t gone ten feet when his girlfriend came boiling out of the truck like hornets out of a nest yelling, “I’m not riding in there.” She and Doris went over to the van and smoked a cigarette and prayed. (I mean she smoked a cigarette and Doris prayed.)

Young Guy carefully backed across the rough field, somehow lifted the cabin out over the piers, and sat the thing right down on the foundation perfectly. I was dancing. He was dancing. Doris and Cigarette Girl were dancing. What a day! Then he tried to pull the truck out from under the cabin but the support brace in the back had dug into the dirt. Truck won’t move. Cabin won’t budge. Dancing is not so good. In order to get the truck loose he had to pick up the cabin again, twist it a little bit, and…when he did, down came the piers, down went the cabin, and down sank my heart. Dream cabin in the woods was sitting at about a 45 degree angle with concrete blocks all around it and a hole in the floor where the toilet once had been.

The boys and I, and several other friends, have been reading Rick Warren’s Purpose Driven Life for the last few weeks. It’s a good book, easy to read, about getting back to the basics of our Christian walk. You might say it is about having a solid foundation. I find that in the helter-skelter, hustle and bustle of life I often get away from the things that keep me straight and level and solid. Things like a deep, intentional prayer life, a consistent time ruminating on the Word of God, seeking His face in gentle acts of service to my family, my friends, and to people I don’t know, and, focused accountability with a few guys that keep me honest and know when I am not being transparent. Those things are not spectacular. They don’t have much pizazz or sizzle. They are just the solid piers upon which any life of faith must sit. I forget that. Well, to be honest, sometimes I don’t forget. I just don’t want to do it.

Usually when that happens I begin to tilt, get a little off center. I may look okay at first glance but if you look carefully you’ll see that I am out of balance and there are a few glaring holes on the inside. I’m short with the people I love. I am impatient about the path God has me on. I get worried and fearful about my circumstances. And I lose track of the purpose He has set before me. I’m a mess. But getting back to the basics, doing the elementary things, has a way of righting me, hauling me back up onto a more firm foundation. Jesus may have had my little cabin in mind when He said, “I will show you what he is like who comes to me and hears my words and put them into practice. He is like a man building a house, who dug down deep and laid his foundation on the rock.” (Luke 6:47-48) There are all kinds of neat, special things I want to do for Christ. But the bottom line is the bottom line. What really matters is getting, and keeping my life on the rock.

The next day my friend Robert came out. He brought a little hydraulic jack. We started at one corner and jacked up the cabin and slipped one block under it. Then we went to the next corner and did the same thing. Then the next. Over and over again, one block at a time we lifted the little cabin and rebuilt a solid, firm foundation. It took a while but at the end of the day we had Mr. Tumbles (that’s what Robert named the cabin for obvious reasons) back on level footing and looking good. That’s what we have to do almost continually. One block at a time, one step at a time, discipline after discipline, we build and maintain the foundation of our lives, maintaining our houses on The Rock. And, I have come to believe, when we do that our ability to be used by Him and live for Him is, well, it’s a dream come true. I don’t know where you are in your faith journey today but if you are not solid like you want to be I suggest you look at the foundation. Get that right and the rest will take care of itself. And if you need a big wrecker truck, I’ve got a number for you. 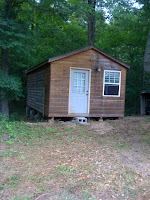