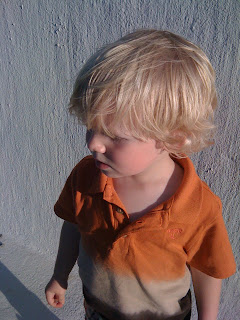 I had an idea the other day. I was talking to a young friend who is having a difficult time establishing and making boundaries in his life. He gets into trouble because he hasn’t decided where his life begins and other peoples ends. Paul says in Ephesians 4:14 that when we are like that we are like a ship adrift on a sea, “tossed about by every wave of new ideas.” We are easily persuaded to do this thing that we might not otherwise do or go to this place that we might otherwise not go.

So I suggested to my young friend that he write out a short list of a few rules to live by, things that he would operate by when the pressure came from other places to make a bad decision. He jumped all over that. He was so excited. “Dude,” he exclaimed. (I love to be included in the dude crowd.) “Dude, that’s just like the movie Zombieland. This guy had a bunch of rules that helped him to not get eaten by the zombies.” Well, what do you know? I had no idea that I was so artistically in tune with the creator of such a cinematic classic. I am so blessed to know that Mike Courtney, Cecil B. DeMille and the director of Zombieland have similar genius.

Cecil B. DeMille, in case you miss my witty reference directed The Ten Commandments. Remember Charlton Heston and the Red Sea and God writing His rules on a tablet of stone. Okay, maybe it wasn’t so witty after all. But the problem is that many of us think rules, ours or God’s, take away our freedom and make us zombies. We just stumble around with our arms straight out and our eyes have closed doing what we are told to do and not allowed to have any fun or be our own person.

Obviously you’ve missed the finer nuances of that work of art. In Zombieland it was the rules that kept the guy from getting eaten. The people without rules got caught and turned into zombies. In other words boundaries and commandments and living according to God’s plan for us, rather that impeding our freedom actually keeps us free. When I make Jon-Mical, my grandson, hold my hand while we walk across the parking lot, I know that I am keeping him free by not letting him get hurt by a life without rules. Paul again talks about that in Romans 5 and 6 when he says that without the law we wouldn’t know what sin is. And without sin we wouldn’t know what grace is. Dudes, let me put that in words you can understand. If it weren’t for rules you wouldn’t know the zombies from the, well from the dudes and dudettes. And if you didn’t recognize the zombies you wouldn’t know how good it is to not be a zombie. Get it?

Well, let me try one more time. Knowing and living by the boundaries that God has placed in my life does not take my freedom away. In fact, it keeps me from the many pitfalls in life that would destroy both me and my freedom. So the rules in fact keep me free and that is a wonderful gift from God. No wonder the Psalmist says, “The boundary lines have fallen for me in pleasant places.” Psalm 16:6
On this weekend when we celebrate our freedom and remind ourselves of how great it is to not be a zombie perhaps I should also thank God for the rules that are in place that make my freedom in Him and in life possible. I am so grateful for the boundaries. Now pass me the popcorn, dude, the movies about to start.